My little brother is a quintessential 21 year old male.  He skates, he snowboards, he goes to college and works his butt off holding down a job or two on the side.  He likes all things that are “cool” but totally stands out in his own way.  There was no doubt in my mind that this would be the perfect motif for him.

I wanted to make him something that would keep him warm while snowboarding, was unique but not *too* out there.  Something functional but not boring.

Originally I’d wanted to just do two colors, the darker and lighter blues but ran out of the lighter blue two rounds before the colorwork ended.  I had to rip back and with the help of my mister, decided to keep the skull in the light blue while starting the new “flaky” part in a rusted brown/orange color to finish off the beanie. 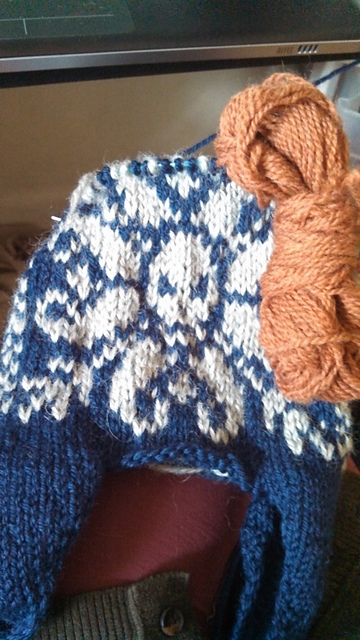 I used stash yarns, acquired long ago probably in the mix of pounds and pounds and pounds of fiber scored in a thrift store who didn’t know the gem contained with the 5 (five!) garbage bags I left with.  When the hat was complete, I added a crocheted border and braids at the bottoms of the earflaps.  More Ravelry details here.

After the knitting was done all that was left to worry about was whether or not it fit.

3 thoughts on “Christmas Gift Round Up 1: The Deathflake Beanie”